I strongly reccomend that one of you changes your vote, as these two forms of locomotion require entirely different body plans and aren't really compatible. If I may, evolving some sort of fins in order to more efficiently swim as well as stabilise the body would benefit either of the two votes you have suggested.

But what if they roll max on both

Thats the thing, I just don't know how I could incorporate both designs into one. If someone can offer a valid example/explanation as to why its plausible then I'm all ears, but otherwise they can't do it.

Put the jets near the "head", but vented towards the posterior? That's the only body part that stays pointed in the same direction as an eel swims. Watch: https://youtu.be/i32_wVVgPB0

The resulting animal would probably look less like an eel and more like a giant, armored sperm, but that's the price you pay for compromises.


Neither of you are on the same team (and you never have been).

You're on Team Prometheus with Tiberius and myself. I'm trying to fix our non-adaptive immune system so that the viruses won't just evolve around our defenses and annihilate us. We also need a proper stomach, as cytophagy just isn't cutting it for something this big and active.

So I will support your vote for the immune system
I like potatoes.
Top

I dunno how the hell I misread that, sorry Gabriel... Either way, I wasnt gonna change the vote.

Ⓐ☭Empathy is the most radical of human emotions, and it's rejection is inherently reactionary☭Ⓐ
Top 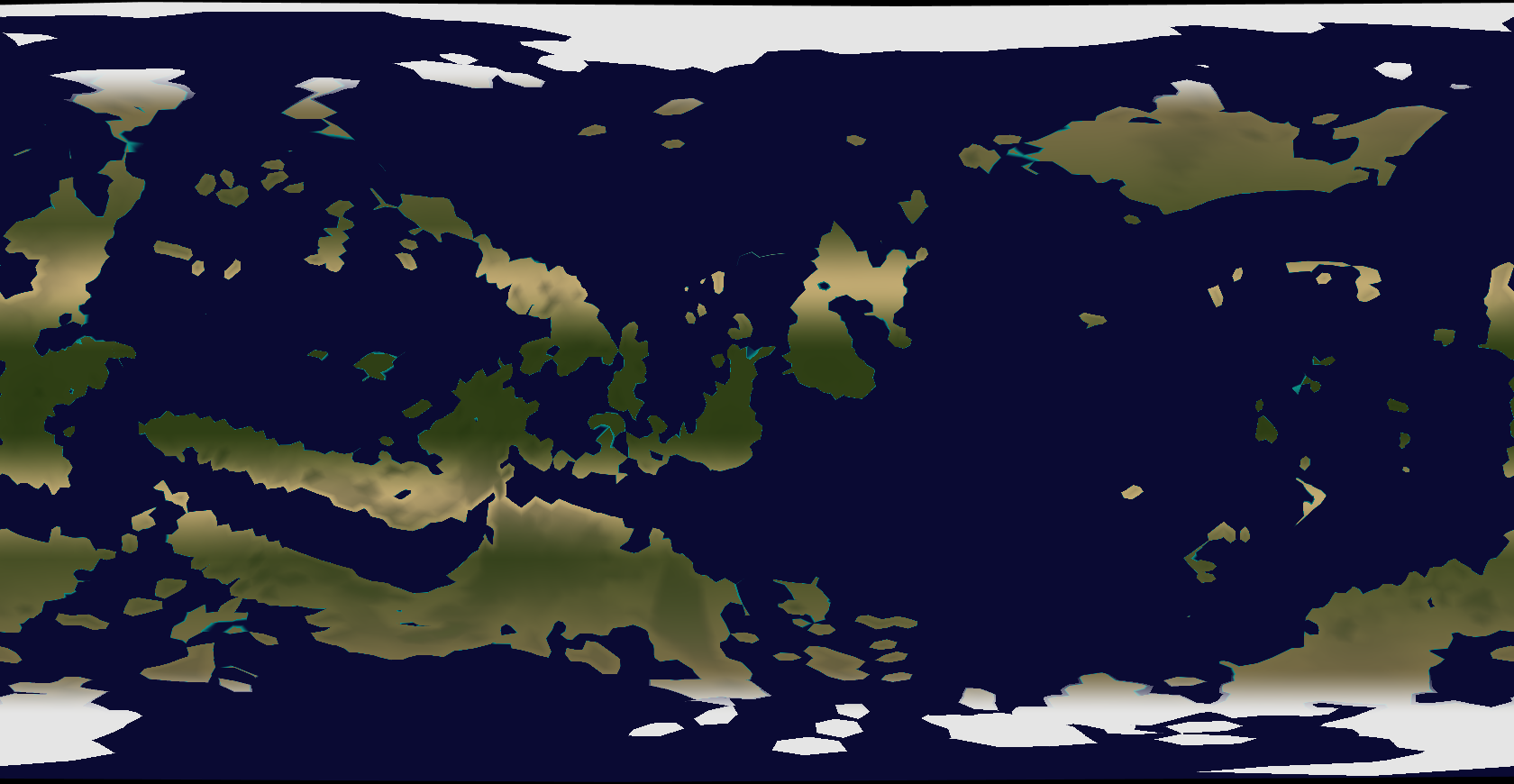 PLANET DESCRIPTION: In a solar system similar to our own, there is a small planet approximately 80% the size of Earth, known as Petrixic. Aside from this it is practically identical in terms of composition, and is located within the goldilocks zone. It has a 20 hour day/night cycle, and takes approximately 400 of its days to orbit its sun. It has one tidally locked moon which is the same proportion as Earth's moon in terms of its size relative to Petrixic. It is highly tectonically active and has a thick ozone layer, allowing the land to be colonized by tiny plants (however no land animals have yet appeared).
This planet has evolved structured multicellular organisms, and is currently at the begining of their own Cambrian explosion, characterised by the rapid diversification of animals to fill new evolutionary niches. However, no animals have arrived on land yet.

PLANT LIFE: Most plants have developed specialised sections of roots that store energy and water in periods of excess (e.g when it rains) and form structures similar to potatoes or yams, for periods of drought or low amounts of sunlight. This has allowed these plants to spread across most habitats that now exist on land, however their reproduction is still confined to periods of heavy rain due to their spores being very moisture dependent. This new group of plants has also developed fibrous, wood-like stems, allowing them to grow to much greater heights than before, often reaching a metre or more in height. By our standards, this isn't much, however it is enormous compared to the few centimetres plants could reach before this adaptation.

Segmented Calciform (Celfigura Loricatorum)
This organism has become the first major multicellular carnivore/scavenger, having rapidly evolved within the past 50 million years efficient methods of locomotion as well as evolving the ability to consume non-photosynthetic cells. A distant anscestor of this organism first evolved segmentation in order to allow it to grow to much greater lengths, as previously it was constricted in it's width and height (and still is), which prevented it from growing to larger sizes due to its inability to absorb oxygen that could penetrate to its core. Soon after, small muscles evolved that could be triggered through an extremely basic nervous system that allowed the organism to move in a similar fashion to an eel, mostly as a reaction to potential threats. This method of movement was quickly augmented through the evolution of fins, with the large caudal (rear) fin evolving first to help generate thrust and two pectoral fins evolving later in order to control the direction of movement. The bone fin evolved later as a method of stabilising the swimming pattern of the organism.
Largely due to its new method of movement, the originally chemotrophic cells that were located on exposed patches of skin began to change into phagocytic cells that could consume other cells, providing a more energy intensive but riskier method of obtaining nutrients and energy than previously. However, due to a genetic quirk the Segmented Calciform finds chlorophyll (the main component associated with photosynthesis) highly toxic, only allowing it to consume non-photosynthetic organisms such as animals and bacteria. Due to the large amount of poisonous animals that currently exist within Petrixic, this organism is mostly a scavenger, feeding off the "safe" cells that make up dead animals, the poison of which has long-since degraded.
While this organism has developed a great method of transportation, its restrictive diet as well as its lack of a proper digestive, circulatory or respiratory system means it has a very low energy production, forcing it to use its caudal fin very intermittently. It can often die as it simply cannot keep up with its metabolic requirements. This has caused this organism to drop a level in terms of its conservation status. 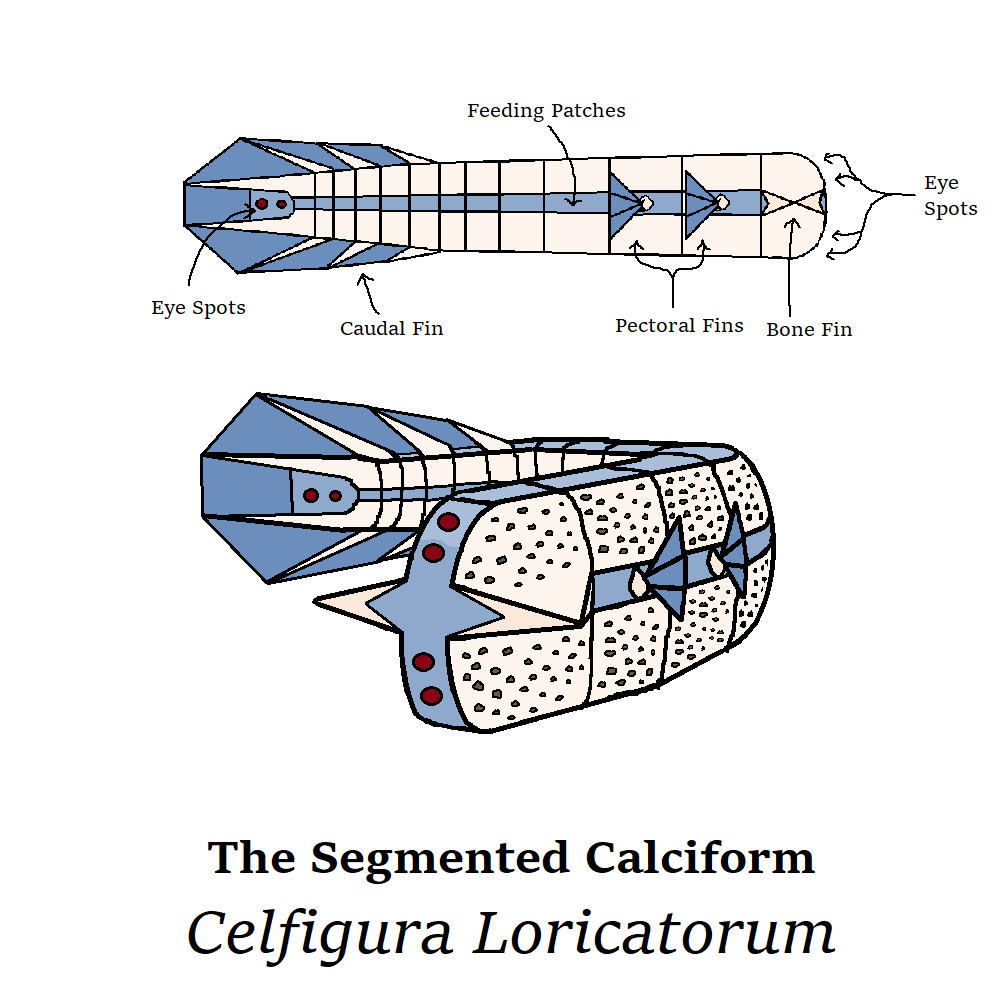 A small eel-shaped segmented organism, approximately 5 cm in length. This organism has an extensive and porous bone-like armour that engulfs the majority of its body. The only exposed "skin" is used as areas for the organism to feed or to sense it's environment. 8 eye spots made up of occeloid-rich cells located on the front and rear (4 on front, 4 on rear) of the organism are used as primitive eyes that can sense light and movement. This organism has 5 true fins, 4 being pectoral fins located on the second and third segments of the body, with the last being a large caudal fin located on the rear. It also has a sixth "false" fin comprised solely of bone located on the head, that provides extra stability while swimming.
Notable Features: Diet:
Carnivorous Cytophage: Specialised patches of cells engulf other non-photosynthesising organisms (mostly animals and bacteria) in order to then digest them and obtain nutrients and energy
Habitat:
The depths to the shallows of the mineral-rich oceans of Petrixic.
Conservation Status:
VU

Bicubicite (Novaventris Bulltantus)
The Bicubicite has not changed much externally, aside from the loss of feeding stripes on its skin. This is due to the evolution of a new revolutionary organ: the stomach. Originally forming through a genetic mutation that produced a second swimbladder, this new organ was quickly repurposed to digest food, transferring the external phagocytic cells to its new internal chamber. It also developed a highly acidic stomach fluid that is capable of breaking down most organic matter. This new organ comes with signifcant advantages, as it allows the organism the ability to efficiently consume/digest food while searching for more food, instead of being forced to do one or the other as it did when it fed externally (as the organism had to constantly be in contact with food, forcing it be stationary in order to eat). It also allowed the organism to become slightly better when it comes to movement, as the majority of the skin cells that lack occelloids now have flagella stemming from them (however this benefit is fairly miniscule). It also evolved an "oral complex", similar to the original oral sphincter however now also allowing the control of a valve that allows it to "switch" between expelling/intaking food or air. The stomach that this organism has evolved, while a significant improvement, is nowhere near perfect, as the organism has to expel the contents of its stomach once it has finished digesting them, as it has no anus. This limits the regularity of its feeding schedule, as it can only eat more food once the previous "batch" has been expelled.
Another major, while invisible (at least to the naked eye) adaptation that this organism has evolved is an adaptive immune system similar to an Earth vertebrates, in which it produces specialised antibody-producing cells that can combat practically any bacterial or viral threat (given enough time). As such this organism has dominated in the ocean, especially when combined with its lack of true predators. 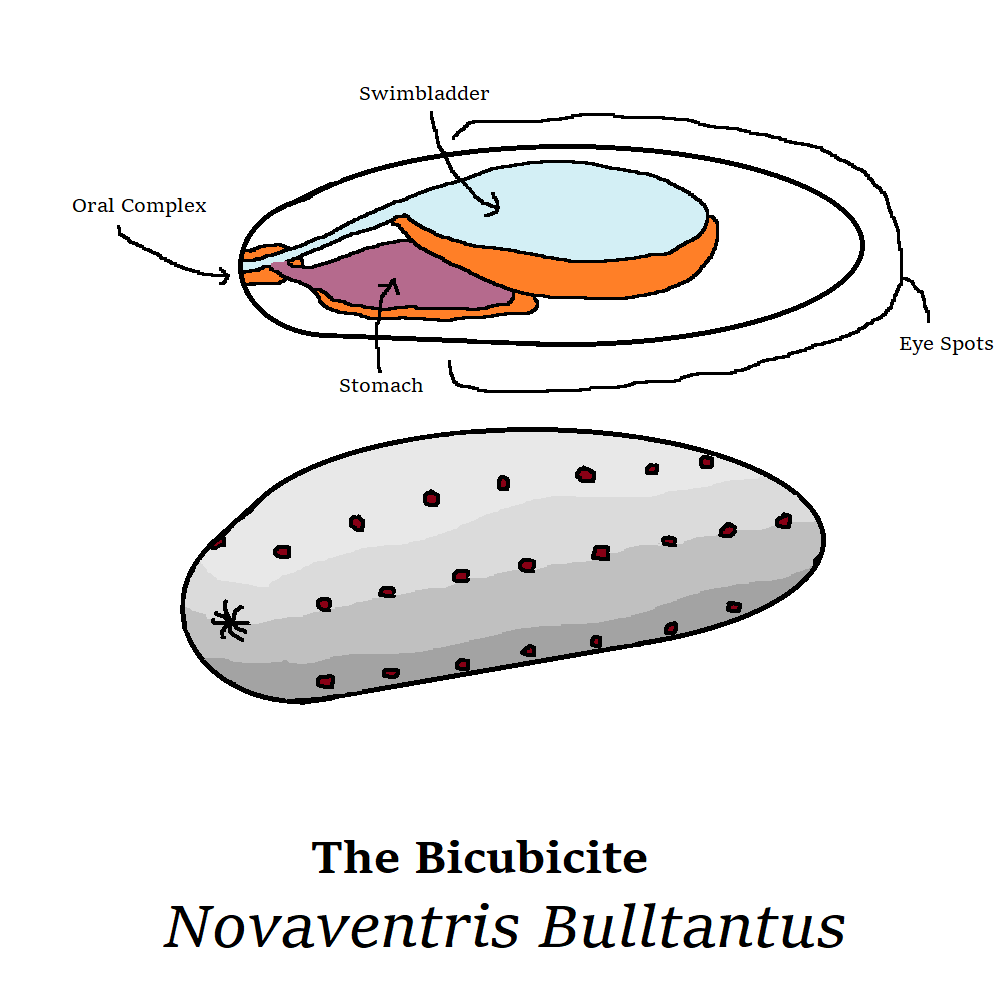 A small cucumber-shaped organism, approximately 3 cm in length. Eye dots made up of patches of occeloid-rich areas of skin allow the organism a primitive method of sensing light and movement. Flagella-rich cells on the back and sides of the organism are used to propel itself, however fairly slowly. An oral sphincter allows the organism the ability to modify its buoyancy through expelling or intaking air, as well as to consume and expel contents from the stomach.
Notable Features: Diet:
Herbivorous Cytophage: Specialised patches of cells engulf other organisms (mostly algae/plants) in order to then digest them and obtain nutrients and energy
Habitat:
The shallows and surface of the mineral-rich oceans of Petrixic.
Conservation Status:
LC

Spotted Cyaprone (Harenaeus Planae)
This organism has formed multicellular flatworm-shaped patches that grow on the sediment of the ocean. This has allowed it greater safety in terms of nutrient and energy, as the cells can provide for other cells in times of need. However despite this significant adaptation, this organism still remains very primitive compared to other multiceullar organisms that exist within the oceans at this time, and lacks any true senses or complicated structures/organs. 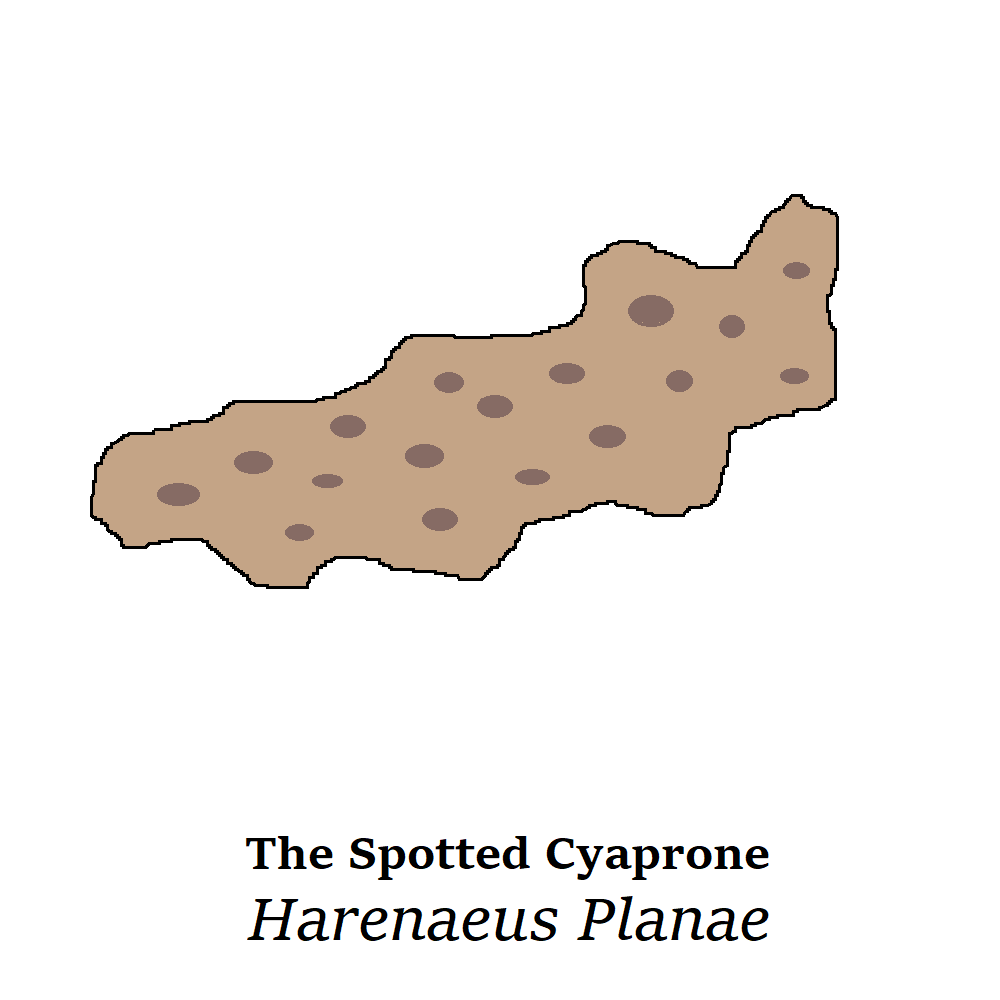 Note: All of you have now become multicellular, congratulations! If I may, some adaptations that would greatly benefit you and allow you to grow larger include: develop of circulatory, respiratory and digestive systems to allow greater intake/production of energy (and therefore allow you to grow larger). Others include muscles and complex nervous systems/evolution of some form of brain(s), as well as the development of better methods of swimming and the improvement/gaining of new senses. However these are only suggestions and in the end you may vote for whatever you want (within reason).
Also I'm suprised none of you have evolved a form of gene transfer (sexual reproduction) yet, as that allows less competition between members of the same species AS WELL AS GIVING YOU A WHOLE EXTRA VOTE. Aka you can become a third faster at evolving!
My Major Competitions:
Droetis
Charbiss
Petrixic
Top

Develop a stomach.
If I'm making a comment with this type of text I'm talking as a moderator.

Vote- Develops an electroreceptor organ for a type of natural sense

Users browsing this forum: No registered users and 60 guests