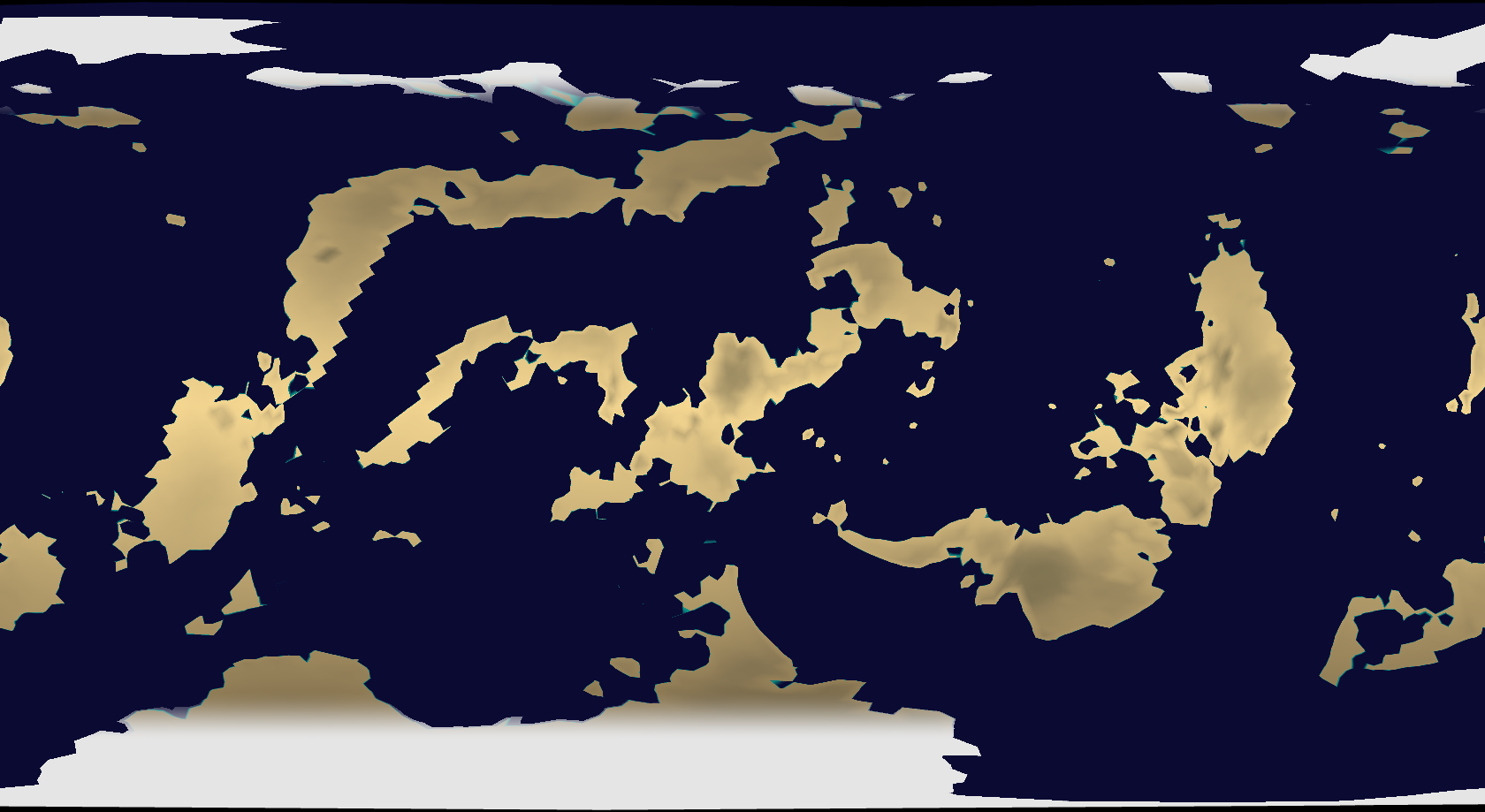 PLANET DESCRIPTION: In a solar system similar to our own, there is a small planet approximately 80% the size of Earth, known as Petrixic. Aside from this it is practically identical in terms of composition, and is located within the goldilocks zone, not too hot, and not too cold, just right for life! It has a 20 hour day/night cycle, and takes approximately 400 of its days to orbit its sun. It has one tidally locked moon which is the same proportion as Earth's moon in terms of its size relative to Petrixic. It is highly tectonically active, however the land is completely uninhabited and inhospitable, due to the very thin and weak ozone layer. Currently this planet is devoid of any form of complex organisms, however new species of eukaryotes have evolved and spread across the oceans through the use of their flagella, and some have developed one of the earliest forms of predatation - cytophagy, in which they engulf the other organisms and digest them to absorb their energy and nutrients. However other organisms, have responded to this new threat by developing unique defence mechanisms, such as physical "shields" and poisons.

PLANT LIFE: A strain of Origin Bacteria absorbed a cyanobacteria and eventually developed a symbiotic relationship, forming the first true plant cell, a primitive unicellular Algae. Plant life exists only within the oceans at this stage.

Conchacalcites (Neovitus Clupeatus)
The Conchacalcite has evolved a porous calcium-based "shell" called a frustule, surrounding its cellular membrane. This frustule provides protection against the new predators that have begun to dominate the oceans, however it is not impenetrable, merely making it significantly more difficult for predators to distinguish from the surrounding rocks and well as dissolve the frustule in their digestive acids. Due to the rise of the Amoeboids, this cell has been heavily preyed upon, and it's conservation status has dropped a level, to Near threatened.
Appearance:
Small eukaryotic cells, approximately 150 µm in diameter. Has a porous calcium-based frustule (cellular shell) that provides protection.
Notable Features: Diet:
Chemotroph: Absorbs various mineral from the surrounding water to provide energy and grow.
Habitat:
The rocky substrate and currents of the mineral-rich oceans of Petrixic.
Conservation Status:
NT

Giant Amoeboid (Amoebefigura gigantica)
A new family of unicellular organisms has arisen, known as the "Amoeboids", which have developed a much more flexible cellular membrane, allowing them to stretch and enwrap other cells and then to digest them by pumping the cell-containing "bubbles" within them full of digestive acids. This amoeboid has evolved the ability to transport itself through the use of a single flagella located on its end, in order to find its prey much more effectively. However, it still travels blindly and preys upon all cells it encounters - including members of their own species. The Giant Amoeboid has also grown significantly, now measuring around 800µm in diameter. This gives it a great advantage, being the largest organism in the ocean, being able to prey upon almost all smaller cells.

Appearance:
Large eukaryotic cells, approximately 800 µm in diameter. The have a single large flagella at their rear.
Notable Features: Diet:
Cytophage: Engulfs other organisms in order to then digest them and obtain nutrients and energy
Habitat:
The rocky substrate and currents of the mineral-rich oceans of Petrixic.
Conservation Status:
LC

Cyanitutelas (Neovitus venenum)
This species has developed a potent defensive cyanide-based poison, their name literally meaning "Cyanide Defence". The poison is not excreted, and lies within the cytoplasm waiting to kill any organism that preys upon them. Because of this, other species have effectively left this species alone entirely, allowing to spread across the ocean and have a large population. However, this poison becomes completely useless shortly after mixing with high doses of salt, meaning it cannot be excreted into the surrounding environment or used in an offensive manner.

-Colonies
Because who would go near a lump of poison?
SCREW YOU I AM THE ARCH-EMPOROR
Staff of the Official Discord

Voting for that flagella.

Can you use the vote exchanger as support for votes?
If I'm making a comment with this type of text I'm talking as a moderator.

Can you use the vote exchanger as support for votes?

No but you can use your own team members.
My Major Competitions:
Droetis
Charbiss
Petrixic
Top

Can we develop calcium spikes on the outside of the shell to dig into our enemies and also to prey on other creatures by bumping into them? It would puncture the cell membrane and provide us with yummy cell guts to eat.
- Your local Red Panda with way too much power

Double up on the flagella vote.
Ⓐ☭Empathy is the most radical of human emotions, and it's rejection is inherently reactionary☭Ⓐ
Top

Grockstar wrote: I need to vote

GabrielGG wrote: I need to vote

20 characters! wrote: I need to vote

Users browsing this forum: No registered users and 21 guests