How do they work? 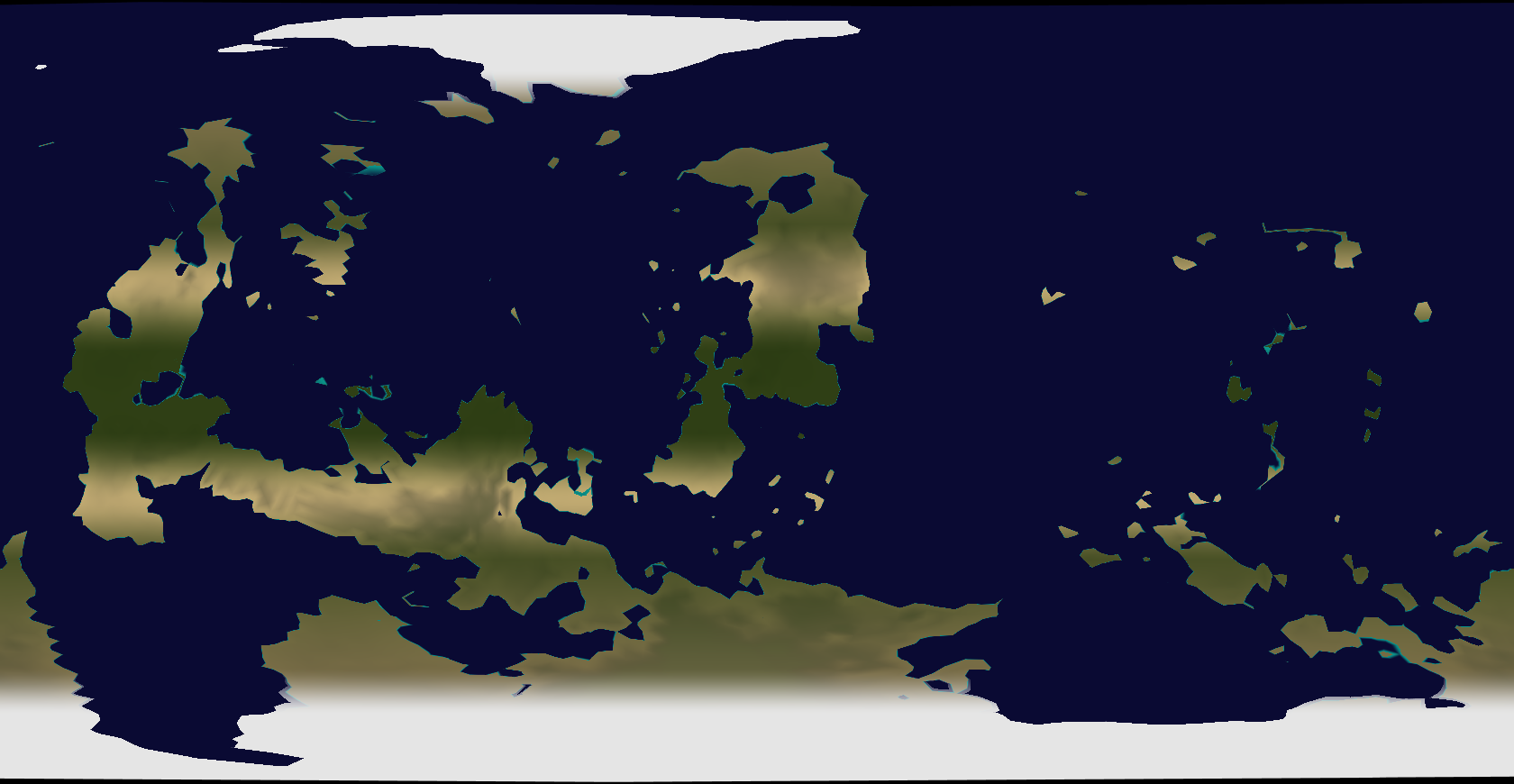 PLANET DESCRIPTION: In a solar system similar to our own, there is a small planet approximately 80% the size of Earth, known as Petrixic. Aside from this it is practically identical in terms of composition, and is located within the goldilocks zone. It has a 20 hour day/night cycle, and takes approximately 400 of its days to orbit its sun. It has one tidally locked moon which is the same proportion as Earth's moon in terms of its size relative to Petrixic. It is highly tectonically active and has a thick ozone layer, allowing the land to be colonized by plants (however no land animals have yet appeared).
This planet has evolved structured multicellular organisms, and is currently in the middle of their own Cambrian explosion, characterised by the rapid diversification of animals to fill new evolutionary niches. However, no animals have arrived on land yet.

PLANT LIFE: Plants have developed seeds, a revolutionary new adaptation that has allowed them to successfully breed at any time of year and grow due to their energy and nutrient deposit located within the seed. This allows plants the ability to reproduce whenever they want, rather than waiting for heavy rainfall. Large seaweed-like forests have developed, and have caused significantly more food matter for herbivores and omnivores, which has boosted their populations.

Omnivorous Calcileech (Hirudoclypeus Omnivorum)
This organism has not changed significantly in terms of external appearance, aside from one new feature. Instead, it has developed a long tubular stomach, that turns around once it reaches the organisms tail, creating the appearance of a "double stomach" that extends throughout the organism. The stomach returns to the mouth so that any excess undigested food can be regurgitated, as currently this organism lacks an anus. This adaptation has allowed them the ability to go longer between feeding, as it can store food inside itself rather than having to constantly feed.
Their stomach cells also secrete specialised proteins that have evolved to bind to the previously toxic photosynthetic pigments such as chlorophyll and take them to skin cells to be processed. However, these proteins take a very long time to break down, so the pigments remain in the skin, turning it green. At the current point in time this doesn't offer an advantage or disadvantage, however if colour vision is ever evolved then this could be modified to create an effective form of camoflauge. The older an organism, the darker green it's colour.
This organism has also developed a mouth, in the form of a large bony feeding spine. The spine is hollow, being lined internally with muscles that can cause it to suck with a lot of force. It inserts this feeding spine into the soft parts of other animals or plants, and sucks out any organic matter available. This pretty much always kills the preyed upon organism. 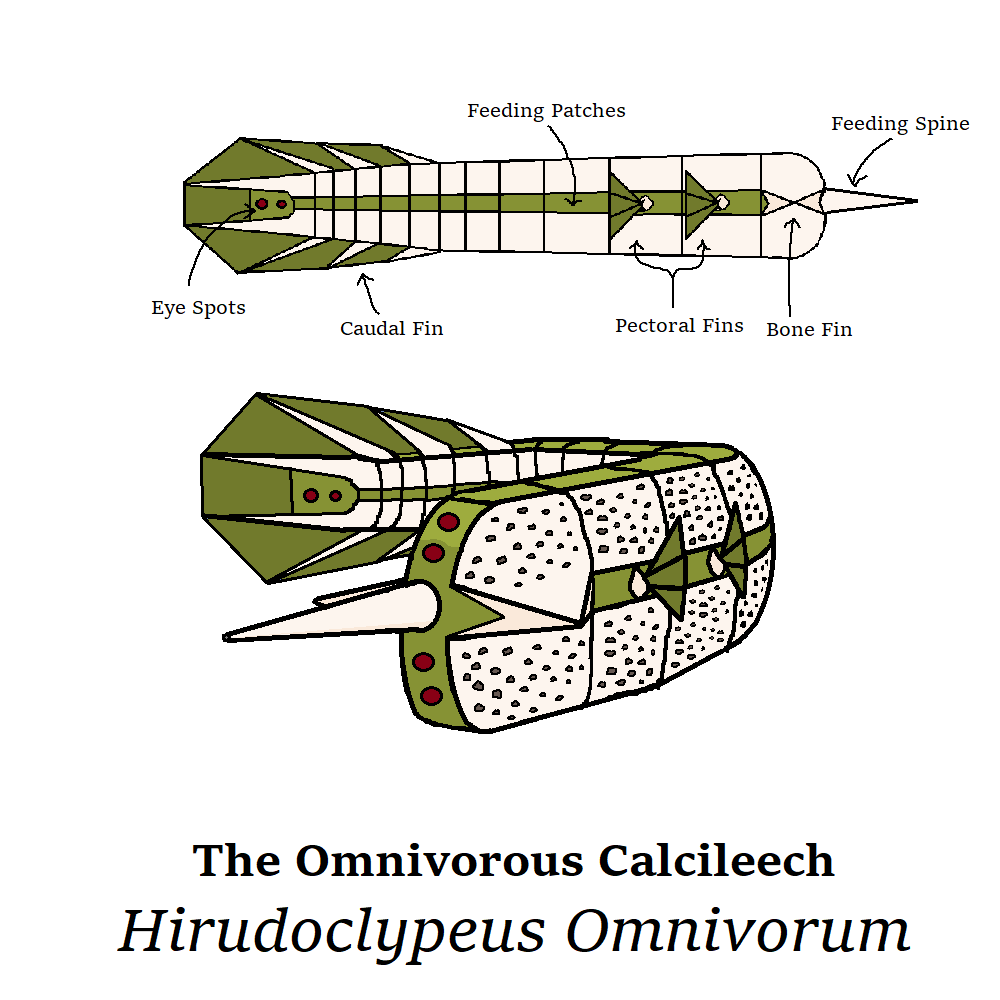 A small eel-shaped segmented organism, approximately 5 cm in length. This organism has an extensive and porous bone-like armour that engulfs the majority of its body. It has green skin, due to chlorophyll being transferred to the skin from the stomach. 8 eye spots made up of occeloid-rich cells located on the front and rear (4 on front, 4 on rear) of the organism are used as primitive eyes that can sense light and movement. This organism has 5 true fins, 4 being pectoral fins located on the second and third segments of the body, with the last being a large caudal fin located on the rear. It also has a sixth "false" fin comprised solely of bone located on the head, that provides extra stability while swimming. Its mouth is comprised of a bony feeding spine.
Notable Features: Diet:
Omnivorous: It eats the soft parts of organisms that can be sucked through it's feeding spine
Habitat:
The depths to the shallows of the mineral-rich oceans of Petrixic.
Conservation Status:
LC

Dolphin Bicubich (Delphinus Vertebrae)
The Dolphin Bicubich has significantly modfied its body structure, having developed primitive vertebrae and muscles that allow them to vertically undulate in order to generate movement, similar to a dolphin (hence the name). It has also developed a tail fin, comprised of a thick membrane stretched between two prongs of a tailbone. It can move very fast, however lacks as much stability as the lateral undulators as they have no stabilising or direction controlling fins. It has also compressed its body vertically, becoming more flat in order to become more aerodynamic when travelling through the water. Aside from this however it has not changed significantly. 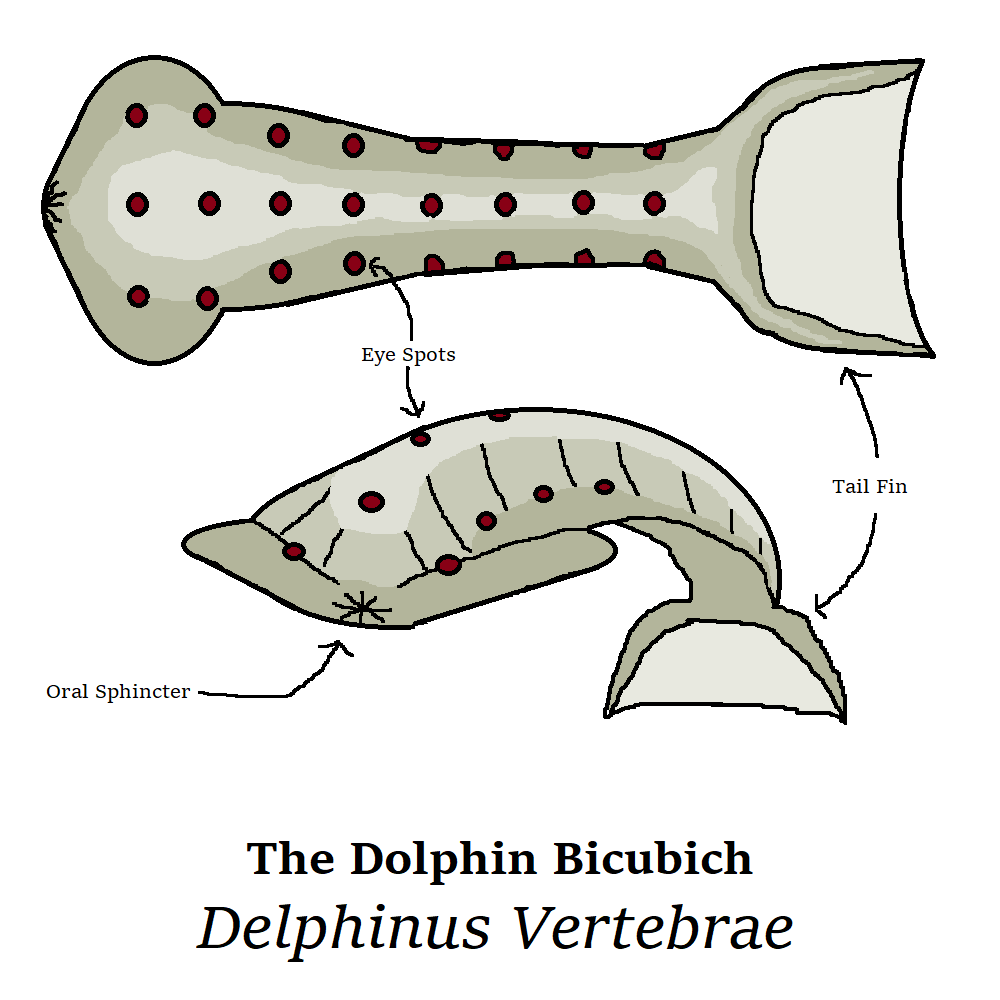 A small vertically compressed dolphin-shaped organism, approximately 4 cm in length. Eye dots made up of patches of occeloid-rich areas of skin allow the organism a primitive method of sensing light and movement. It has a large bony tail fin, comprised of a thick membrane stretched between two prongs of a tail bone. A bony ridge runs along its back, which is the external view of the vertbrae that make up its spine. An oral sphincter allows the organism the ability to modify its buoyancy through expelling or intaking air, as well as to consume and expel contents from the stomach.
Notable Features: Diet:
Herbivorous: Swallows large amounts of algae and plant matter through its oral sphincter
Habitat:
The shallows and surface of the mineral-rich oceans of Petrixic.
Conservation Status:
LC

Aphrodite's Electrite (Calixepistylia Electricus)
This species has evolved very rapidly, gaining muscles that allowed it to move based upon an internal cross-shaped bone. Originally this allowed it to move slowly across the seafloor, but soon its body changed shape into a cup or bell that allowed the muscles to squeeze water and propel itself through jet propulsion (however it cannot go extremely fast). It also developed four tentacles that could pull itself if swimming did not work, as well as allowing it to manipulate its environment (although blindly). This is one of the last moving chemotrophs, with most other multicellular moving animals evolving the ability to eat other organisms.
It also developed the first method of sexual reproduction in animals, with a fifth modified tentacle becoming a gamete dispensor that attaches to another gamete dispensor in order to transfer cells across to create new offspring. Both parent organisms become pregnant during this process. Otherwise, it is also capable of asexual fertilisation to produce clones of itself. This is a significant advantage as it allows increased genetic complexity within the gene pool, reducing their prevalence of "bad" genes and increasing the variation, improving their immune systems.
This organism has also evolved the rather unique ability to electrically shock other animals. Due to a quirk in their movement, their cells overproduce chemicals that can create electric shocks in a similar way to an electric eel. These chemicals are sent to their "Electric heart", located on top of the organism which can send electric shocks through four zig-zagged black tubes that extend upon their upper tentacles. This has given them yet another defence, however it takes a long time to recharge and can therefore only be used sparingly. 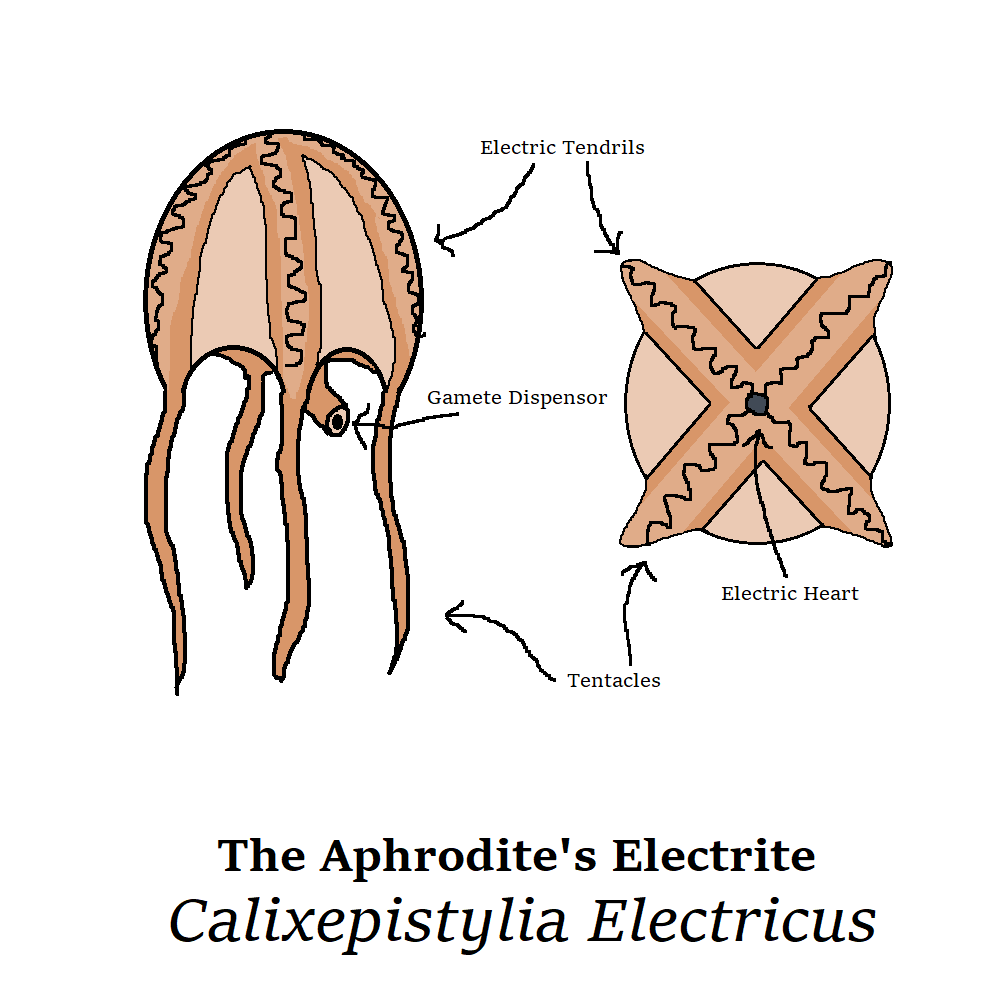 A small jellyfish-shaped organism, approximately 2 cm in length. It has a cross shaped bony ridge, from which extends four tentacles that can manipulate the environment. Has multiple zig-zag shaped black tubes that extend from their electric heart, located on top of the organism that can produce electric shocks.
Notable Features: Diet:
Chemotroph: Absorbs various mineral from the surrounding water to provide energy and grow.
Habitat:
The depths to the shallows of the mineral-rich oceans of Petrixic.
Conservation Status:
LC
My Major Competitions:
Droetis
Charbiss
Petrixic
Top

Vote: Develops a parasitic larva stage in which the larva will found a host, and attached iteslf onto the host using its spikes for passively absorbing the host nutrient. But when becoming an adult, it will leave the host, and develops reproductive gamate when fully matured. "Those protein stealing cells are going to be useful here."
Last edited by Burger Cat on Thu Feb 01, 2018 1:44 am, edited 3 times in total.

Develop a proper nervous system, allowing us to react properly to things, and to act in a more coordinated fashion.

If this vote succeeds, would we get a proto-brain, as in, a lump of nerves?
If I'm making a comment with this type of text I'm talking as a moderator.

Burger Cat wrote: ↑
Wed Jan 31, 2018 11:56 pm
Vote: Develops a parasitic larva stage in which the larva will found a host, and attached iteslf onto the host using its spikes for passively absorbing the host nutrient. But when becoming an adult, it will leave the host, and develops reproductive gamate when fully matured. "Those protein stealing cells are going to be useful here."

Sex Vote: "Does everyone on the team can use sex votes, or only 1 person can?" Develops filter-like fibres on it's tentacles to more effectively absorb nutrients through the water.

There is one sex vote per team, and you can either designate a person to vote for you or discuss it as a team. I don't care as long as the majority of people on a team (aka 2 or more) agree on the vote.
My Major Competitions:
Droetis
Charbiss
Petrixic
Top

joshthehawk wrote: ↑
Thu Feb 01, 2018 12:03 am
Develop a proper nervous system, allowing us to react properly to things, and to act in a more coordinated fashion.

If this vote succeeds, would we get a proto-brain, as in, a lump of nerves?

Yeah you'd pretty much get a centralised nervous system with a primitive brain. Brains require a lot of energy however, so I would advise you to also get a better circulatory (more important) and/or respiratory system (less important) to help fuel it.
My Major Competitions:
Droetis
Charbiss
Petrixic
Top

-Fuse our tentacles into a singular fin

Sex Vote: A tube below the electric heart that the muscles squeeze for better jet propulsion
SCREW YOU I AM THE ARCH-EMPOROR
Staff of the Official Discord

If I'm going to be doing this alone, I'm going to need that sex vote. Being asexual this late in our lineage is a bit silly anyway.