Sorry about that. Recommendations for my vote?

Oh, sorry too. I was on vacation. Recommendations for mine too? I will read the turn description now and wait.

I recommend that you either pick someone to support or vote for some kind of fins to help us steer. Pectoral and ventral fins are particularly useful in the long run as proto-legs.

A closed circulatory system
Ⓐ☭Empathy is the most radical of human emotions, and it's rejection is inherently reactionary☭Ⓐ
Top

I approve of this vote!
If I'm making a comment with this type of text I'm talking as a moderator. 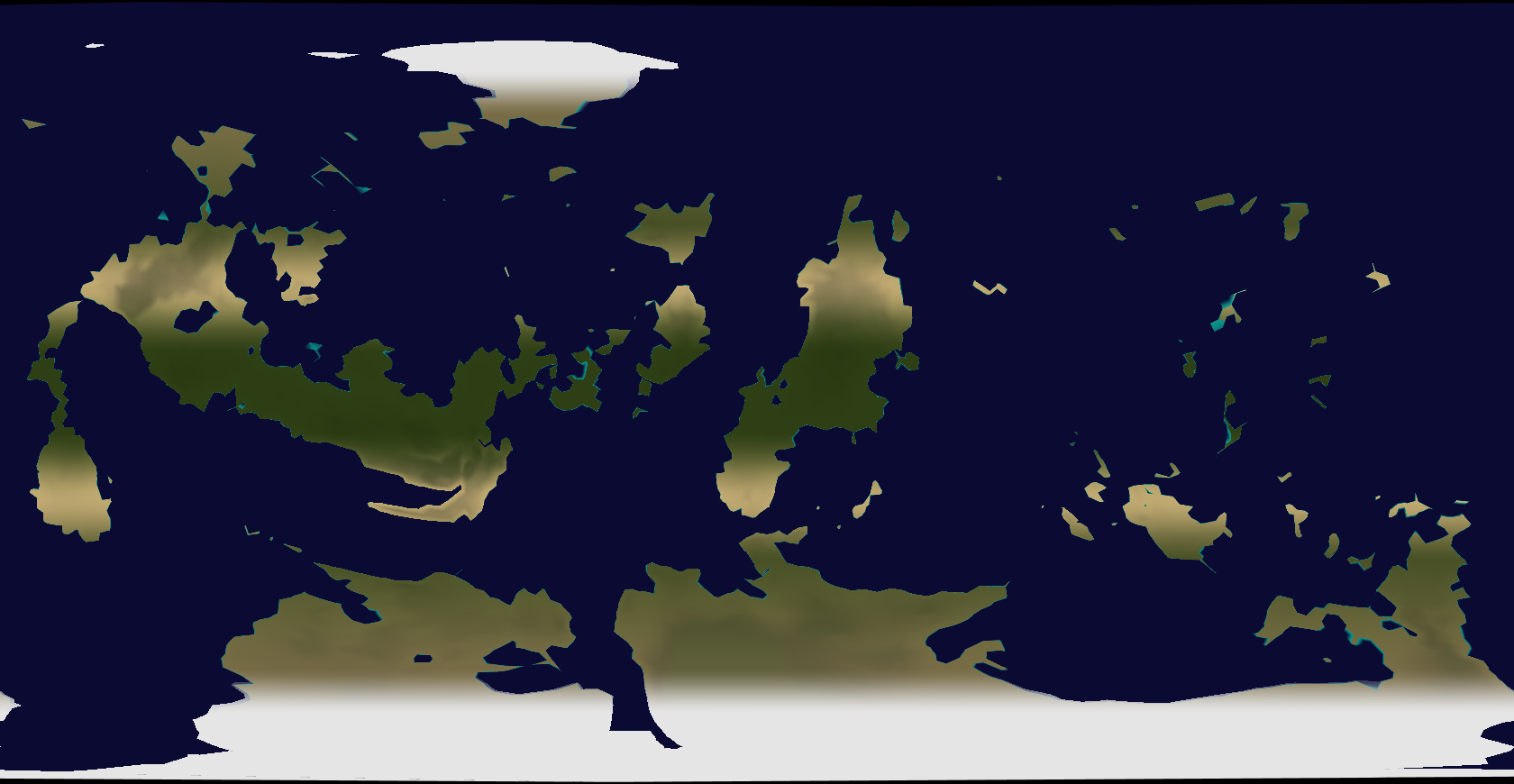 PLANET DESCRIPTION: In a solar system similar to our own, there is a small planet approximately 80% the size of Earth, known as Petrixic. Aside from this it is practically identical in terms of composition, and is located within the goldilocks zone. It has a 20 hour day/night cycle, and takes approximately 400 of its days to orbit its sun. It has one tidally locked moon which is the same proportion as Earth's moon in terms of its size relative to Petrixic. It is highly tectonically active and has a thick ozone layer, allowing the land to be colonized by plants (however no land animals have yet appeared).
This planet has evolved structured multicellular organisms, and is currently in the end of their own Cambrian explosion, characterised by the rapid diversification of animals to fill new evolutionary niches. However, no animals have arrived on land yet.

PLANT LIFE: Two major plant groups have now taken over the land (and some have even migrated back into the sea). They are the Monocaulae and the Polycaulae. Monocaulaue have a single fibrous stem from which spirally branches sprout, similar to a tree, and predominantly grow vertically in nature. They only use seeds to grow, however since the land is unpopulated by animal life they primarily use methods such as wind dispersal or floating if located near waterbodies (similar to how a coconut floats in water). Members of this group have formed the first tree-like organisms on Petrixic, and a new age of large forests and jungle have emerged on the land. Polycaulae are made up of plants that generally spread horizontally rather than vertically, and have multiple stems (mostly non-woody) that spread mostly via underground runners, creating large areas dominated by a single plant. They mostly resemble small bushy or grassy plants that lack branching stems, and instead the stem itself is covered in leaves. They also reproduce sexually through seeds, however this usually occurs in a "breeding season" which varies in frequency and length between species.

Spinebeaked Calcifish (Spinaportan Rostrus)
This organism has developed a centralisd nervous system, giving it a significant advantage via its new ability to coordinate its movements much more efficiently. It has developed a very primitive brain, located in it's newly formed skull which is a more reinforced version of the bony armour that was there before. It had to go through a minor facial rearrngement due to its new brain and skull, and two of its eyes have become horizontal rather than vertical to be closer to the brain as well as providing a better sense of distance. It has also lost its external skin on its top, which has also been replaced with bony armour in order to protect its newly formed spinal cord that runs along its top. It has not grown however, as it is still severely restricted in size by its lack of a respiratory system.
This species has also developed a newly formed closed circulatory system, which has dramatically sped up their rate of growth. It works through the use of a beating heart located in the bottom of the "head" segment, which pumps oxygenated blood in a continuous loop throughout the body. This species is now one of the fastest and most coordinated animals in the sea, and it is beginning to resemble complex animals such as those that are located on Earth. 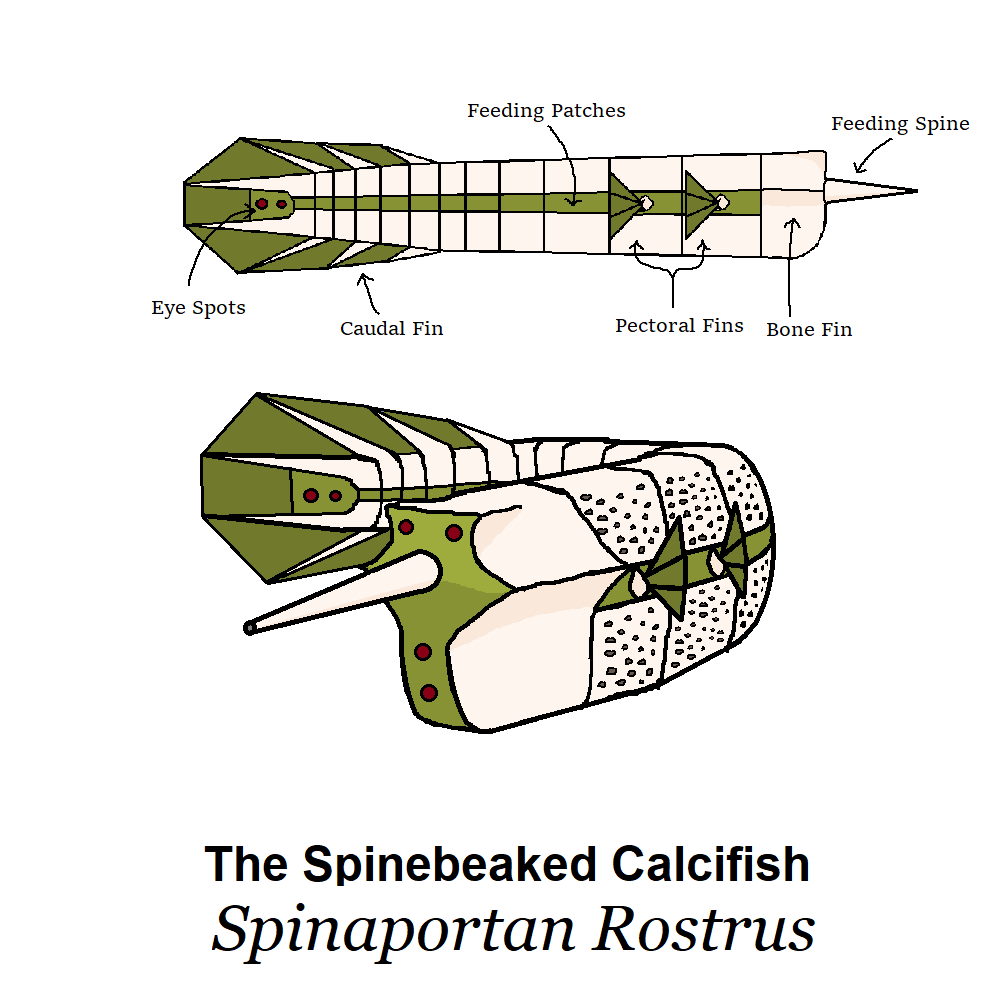 A small eel-shaped segmented organism, approximately 5 cm in length. This organism has an extensive and porous bone-like armour that engulfs the majority of its body. It has green skin, due to chlorophyll being transferred to the skin from the stomach. 8 eye spots made up of occeloid-rich cells located on the front and rear (4 on front, 4 on rear) of the organism are used as primitive eyes that can sense light and movement. This organism has 5 true fins, 4 being pectoral fins located on the second and third segments of the body, with the last being a large caudal fin located on the rear. It also has a sixth "false" fin comprised solely of bone located on the head, that provides extra stability while swimming. Its mouth is comprised of a bony feeding spine.
Notable Features: Diet:
Omnivorous: It eats the soft parts of organisms that can be sucked through it's feeding spine
Habitat:
The depths to the shallows of the mineral-rich oceans of Petrixic.
Conservation Status:
LC

Gonadic Dolbich (Genitantes Delphinae)
The Gonadic Dolbich has developed sexual reproduction, developing two distinct genders: Males, who are typically smaller and produce sperm, and Females, who are generally larger and lay eggs. They have also gone a step further and developed internal fertilisation, in which they go through sexual intercourse in order to increase the chance of fertilising the other partners gametes. Females lay their eggs, which are covered in the same toxic mucous that makes them inedible to other species (although other species that also make this mucous are resistant to it), in small crevices or in other hiding places. Some have even started burying their eggs a shallow distance into the sand. These eggs hatch fairly quickly afterwards, and try to survive as best they can, however the majority are prey for other, larger predators or even members of the same species.
This species has also developed a closed circulatory system, controlled by a beating heart located in its abdomen, which pumps oxygenated blood in a continuous loop throughout the body. This has allowed its cells access to energy and nutrients, speeding up its reflexes and rate of growth. It is still restricted in its size however, as it lacks an effective respiratory system. 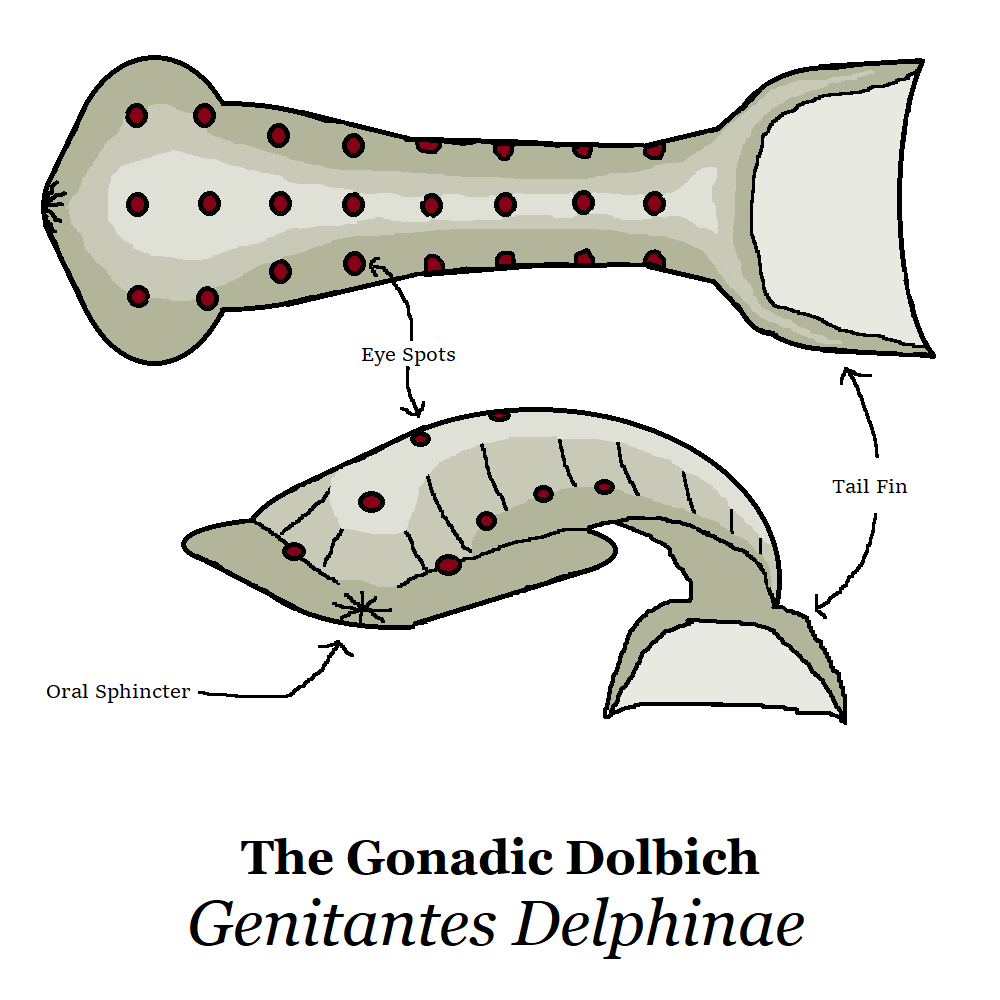 A small vertically compressed dolphin-shaped organism, approximately 4 cm in length. Eye dots made up of patches of occeloid-rich areas of skin allow the organism a primitive method of sensing light and movement. It has a large bony tail fin, comprised of a thick membrane stretched between two prongs of a tail bone. A bony ridge runs along its back, which is the external view of the vertbrae that make up its spine. An oral sphincter allows the organism the ability to modify its buoyancy through expelling or intaking air, as well as to consume and expel contents from the stomach.
Notable Features: Diet:
Herbivorous: Swallows large amounts of algae and plant matter through its oral sphincter
Habitat:
The shallows and surface of the mineral-rich oceans of Petrixic.
Conservation Status:
LC

Parasitic Glassfish (Piscespeculo Parasitus)
The Parasitic Glassfish has developed a unique life cycle. When an Adult Glassfish has mated and has become "impregnated", it seeks out another species on to which it can lay its eggs. Once it has been secured, the tiny eggs are stuck to its skin/back through the use of tiny hooks embedded upon the eggs shell. These eggs quickly hatch, exposing the Larva which resembles the adult, however without any fins or tentacles. Their gamete dispensor is modified to become a parasitic root, which burrows inside the host organism and absorbs nutrients and energy in order to grow. Generally this process doesn't kill most host organisms, unless it punctures a major organ or there are too many other Larva for the host to handle. When mature, the Larva sheds the end of its parasitic root, which then becomes its gamete dispenser, and swims off to continue its life.
The glassfish has also significantly modified its body structure (yet again), morphing its tentacles into fin-bearing boneless limbs. The top two tentacles fused at their ends to produce a main, or caudal fin at their rear. The two remaining tentacles formed twopectoral fins that are used to manipulate it's location within the sea. Suprisingly, each fin contains bones, however the tentacles they are connected to do not. However, this organism is still more primitive relative to other organisms in the sea right now as they lack a true circulatory or centralised nervous system. They also cannot grow very large due to their lack of a respiratory system. 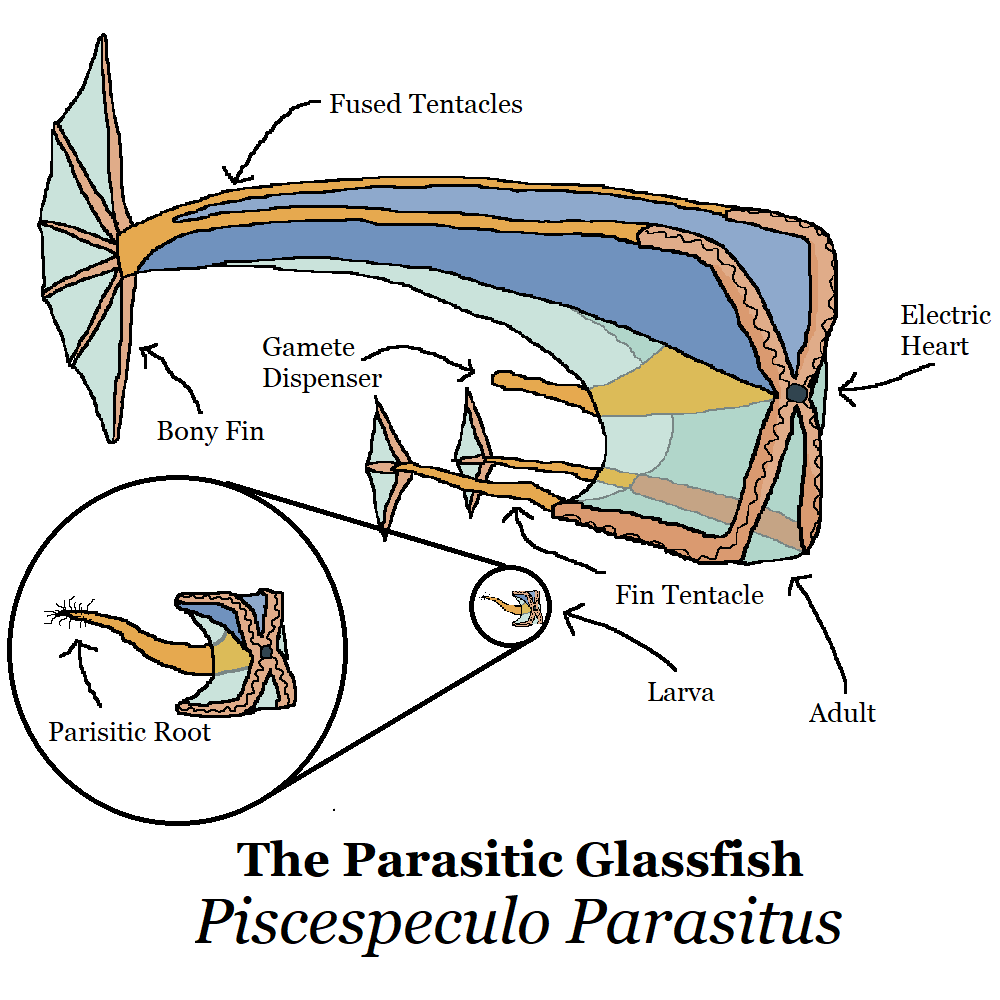 A small fish-shaped organism, approximately 4 cm in length. It has a cross shaped bony ridge, from which extends two pectoral tentacle-fins that can change the direction it swims. It also has one large caudal fin located on its tail. Has multiple zig-zag shaped black tubes that extend from their electric heart, located on the head of the organism that can produce electric shocks.
Notable Features: Diet:
Chemotroph: Absorbs various mineral from the surrounding water to provide energy and grow.
Habitat:
The depths to the shallows of the mineral-rich oceans of Petrixic.
Conservation Status:
LC

Hint Hint Evolve respiratory systems everybody. Also depending on what the respiratory systems are, most of you (except whateverthefuck) can make it to land next turn, as long as you also have circulatory and centralised nervous systems. Although you might want to think about how you'll move about on land.
My Major Competitions:
Droetis
Charbiss
Petrixic
Top

Develop a Respiratory system which favours the areas of the ocean closer to the surface.

Josh, what say you we start focusing on getting out onto the land before anyone else over the next few turns?
Ⓐ☭Empathy is the most radical of human emotions, and it's rejection is inherently reactionary☭Ⓐ
Top

Develop Sexual Reproduction.
If I'm making a comment with this type of text I'm talking as a moderator.

Team Prometheus
Tube gills: Oxygen-absorbing tubes that begin inside the mouth and end outside the body, featuring muscles that allow them to expand and contract for pumping water.

Sex vote: nerve clusters: 3 clusters of nerves in the front, middle, and rear of the body which interpret visual information from the eyespots.

Ok everybody I have set up a basic timeline and I'm thinking of ending this at about turn 30 and starting a civilisation game at that point. In order to "qualify" for civilisation you must have the following six traits by turn 30: What is everybodies thoughts on this?
My Major Competitions:
Droetis
Charbiss
Petrixic
Top
Post Reply
204 posts