Vote: develop a permanent sticky bleach secretion that stays on our skin.
I like potatoes.
Top

I'm on holiday at the moment but I'll write one up when I get back in a few days, no access to a computer at the moment.
My Major Competitions:
Droetis
Charbiss
Petrixic
Top 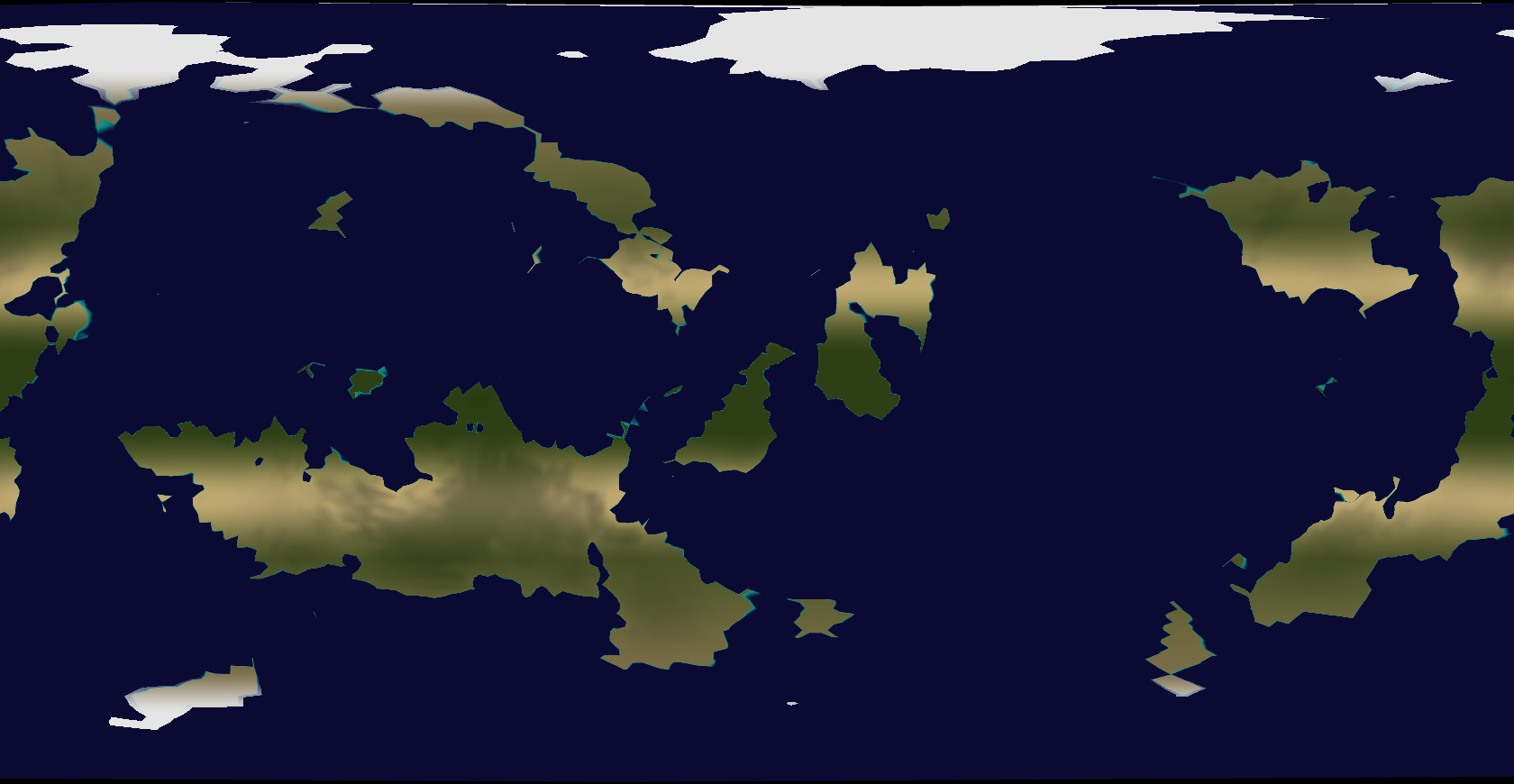 PLANET DESCRIPTION: In a solar system similar to our own, there is a small planet approximately 80% the size of Earth, known as Petrixic. Aside from this it is practically identical in terms of composition, and is located within the goldilocks zone. It has a 20 hour day/night cycle, and takes approximately 400 of its days to orbit its sun. It has one tidally locked moon which is the same proportion as Earth's moon in terms of its size relative to Petrixic. It is highly tectonically active and has a thick ozone layer, allowing the land to be colonized by tiny plants (however no land animals have yet appeared).
This planet is currently in the process of evolving structured multicellular organisms. The amount of pathogenic bacteria and viruses have hit an all-time high, due to the large amount of complex organisms developing.

PLANT LIFE: Plants have developed a waxy coating on their stems and "proto-leaves", allowing them to colonize the land when combined with the now high ozone levels. However due to their tiny size and reproduction through the use of spores, they are still very limited in the environment in which the can live and grow in, requiring high amounts of moisture, and are therefore only located near water sources or climates with high humidity.

EVENT: BIOLOGICAL (Power = 73)
New strains of highly infectious viruses have emerged, destroying most lifeforms that do not have effective immune systems. Most species have reduced numbers (aka you all drop down 1 level in terms of conservation status), however since all player-controlled species have effective immune systems the survivors have adapted to the new threats and will not fall the next turn.

Next event incoming on Turn 8, geological in nature

Poisonous Opticite (Venenum Oculus)
The Poisonous Opticite has evolved rapidly within the past 250 million years, developing into a colonial organism with various specialised cells. Some cells adapted to provide a shield, or to be exact four wide shielded strips which provide protection and structural strength to the organism while allowing it exposed "bare" skin for it to feed with, see using its eye patches, and swim (albeit rather inefficiently) using flagella-rich cells located on the front, rear and sides of the organism. Pores occur naturally within the calcium shell, allowing the cells underneath the shell access to water-based minerals and nutrients as well as oxygen which is required for energy production.
This species has also developed a unique poison which resides entirely within the occeloids that make up their eye patches. In small doses it is not lethal, however when the majority of eye patches on one side are consumed it will generally kill even the largest organisms currently living within the ocean. This organism is one of the least preyed upon, due to its phagocytic-resistant calcium-based shell and poisonous eye patches on exposed sections of skin. However, due to its heavy shell it finds it difficult to move effectively, especially when combined with the decreased amount of flagella that are able to help propel it due to its shell taking up the majority of it's surface area. It will also find it more difficult to grow larger until it gains a more effective method of absorbing and sharing oxygen and nutrients between it's cells. 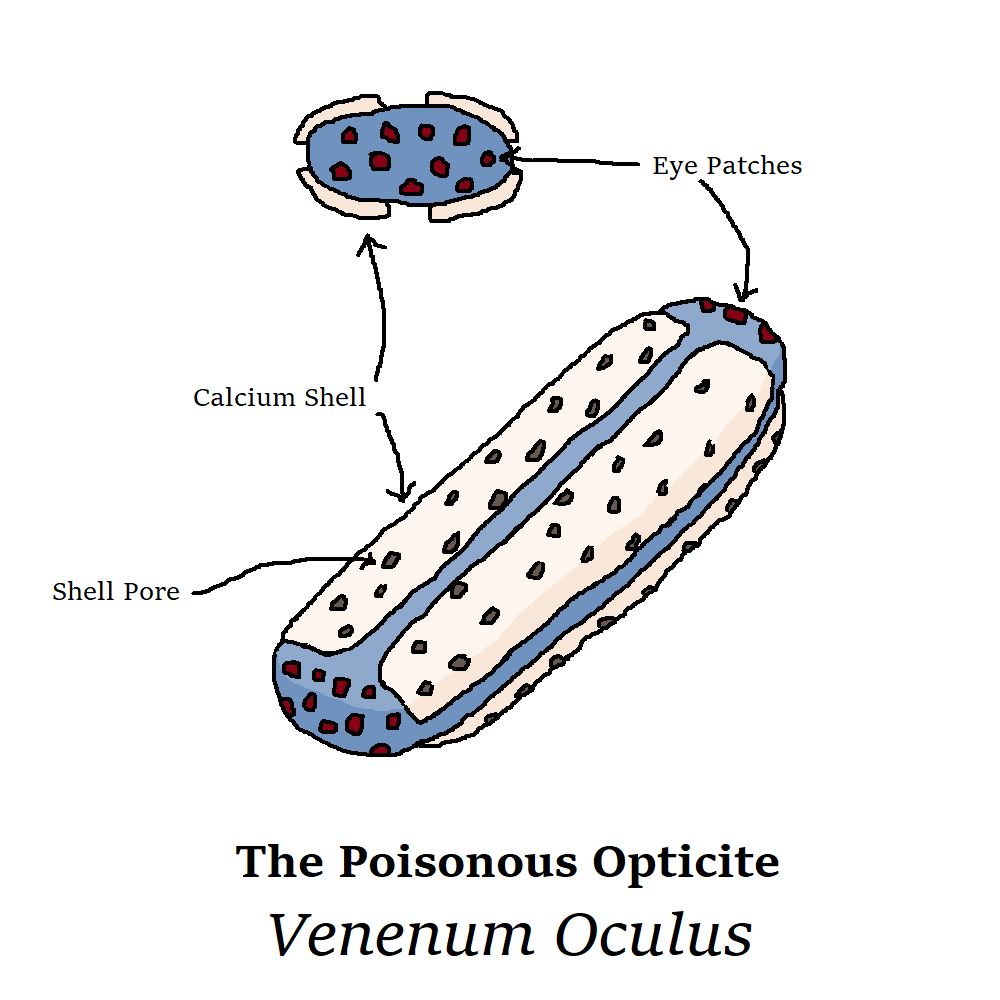 A small compressed-rod shaped colonial organism, approximately 1 cm in length. Has four lateral porous calcium-based shell strips that cover most of its body and provides protection. Flagella-rich cells on the back, front and sides of the organism are used to propel itself, however fairly slowly. Eye patches made up of occeloid-rich cells located on the front and rear of the organism are used as primitive eyes that can sense light and movement.
Notable Features: Diet:
Chemotroph: Absorbs various mineral from the surrounding water to provide energy and grow.
Habitat:
The depths to the shallows of the mineral-rich oceans of Petrixic.
Conservation Status:
NT

Sea Blimp (Rotundimorph Comedentem)
The Sea Blimp has changed dramatically from it's previous body plan, due to the evolution of a primitive swimbladder that derived from its previous air-ring that kept it afloat. This swimbladder is equipped with a very basic proto-muscle that can contract and force air out of its body, thereby controlling its buoyancy. It can also inflate the tube leading to the main swimbladder, causing it's oral sphincter to face towards the surface, allowing it to "gulp" in more air when its oral sphincter is above the surface. One downside with the design of this swimbladder is that it takes a long time to refill, which is achieved passively through the process of cells metabolising and excreting carbon dioxide into the swimbladder (or alternatively it can be achieved actively by the oral sphincter gulping in more air, however obviously this can only occur when the organism is floating at the surface). So while it can go down very quickly, it takes a while to float upwards afterwards. Another major advantage of this swimbladder is its ability to act as a form of primitive lung (albeit very inefficiently) as it allows the organism more surface area from which to absorb oxygen.
This organism has also evolved a modified version of its bleach-like secretion that was originally used to ward off predators, however this new version is extremely sticky and extremely long lasting, and adheres to the skin of the organism, effectively preventing predation and infection against viruses and bacteria. This adaptation also makes it easier for the organism to feast upon algae and other plants, as it can now stick to the organisms in order to constantly maintain contact for its feeder cells so they can operate much more efficiently.
Sea Blimps now produce primitive antiviral proteins such as antibodies that are triggered by the release of cytokines, however these antibodies are only effective against specific viral strains and are not adaptive in the same way that native Earth vertebrates immune systems are. While this organism is now the king of controlling its buoyancy, it is no longer effective at swimming due to its large size in comparison with its flagella. It will also find it more difficult to grow larger until it gains a more effective method of absorbing and sharing oxygen and nutrients between it's cells. 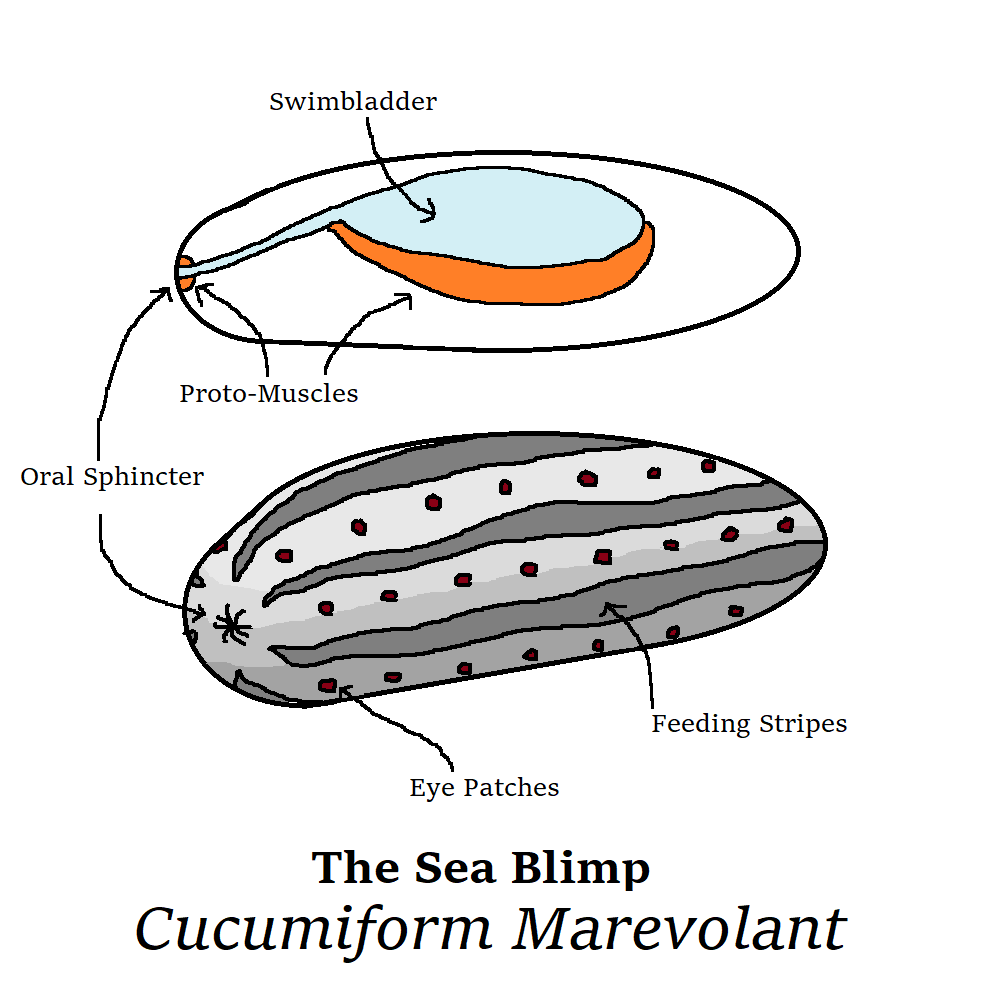 A small cucumber-shaped colonial organism, approximately 3 cm in length. It has strips of cells dedicated to slowly consuming other organisms that brush up against them. Eye dots made up of patches of occeloid-rich areas of skin allow the organism a primitive method of sensing light and movement. Flagella-rich cells on the back and sides of the organism are used to propel itself, however fairly slowly. An oral sphincter allows the organism the ability to modify its buoyancy through expelling or intaking air.
Notable Features: Diet:
Herbivorous Cytophage: Specialised patches of cells engulf other organisms (mostly algae/plants) in order to then digest them and obtain nutrients and energy
Habitat:
The shallows and surface of the mineral-rich oceans of Petrixic.
Conservation Status:
VU

Survivor Bacteria (Busidapis Superesse)
While remaining relatively simple and unicellular in terms of body structure, this organism has without a doubt evolved the most effective adaptive antibody-based immune system out of any organism located on Petrixic. It has evolved a method of producing antibodies that are slightly different each time. Because it produces so many of these antibodies, there is effectively a 100% chance that an invading organism will be rendered unable to harm the cell. This antibody is then copied and rapidly produced, incapacitating foreign threats which are then consumed and destroyed by its internal lysosomes. As such this bacteria is relatively common on the seafloor, however it has only recently evolved its new defensive system and due to its limited habitat compared to the other species it is currently endangered.

Appearance:
Medium sized eukaryotic cells, approximately 650 µm in diameter. They are coated in hollow spines that kill other organisms that are pierced by them.
Notable Features: Diet:
Chemotroph: Absorbs various mineral from the surrounding water to provide energy and grow.
Habitat:
The rocky substrate and currents of the mineral-rich oceans of Petrixic.
Conservation Status:
EN
My Major Competitions:
Droetis
Charbiss
Petrixic
Top

Develop cells that are specialized for the engulfing and breaking down of foreign cells, primarily algae.
If I'm making a comment with this type of text I'm talking as a moderator.

Develop cells that can contract and expand,
thus allowing the organism to move in an eel-like fashion to increase its speed when in danger or chasing prey.

Ⓐ☭Empathy is the most radical of human emotions, and it's rejection is inherently reactionary☭Ⓐ
Top

Sassy Cassie wrote: ↑
Tue Jan 16, 2018 11:45 am
Develop cells that can contract and expand,
thus allowing the organism to move in an eel-like fashion to increase its speed when in danger or chasing prey.

At the moment you are a chemotroph and thus do not have any prey (however if Josh's vote succeeds then this will change), however what I gather from your vote is that you want to develop muscles and an eel-like method of movement?
My Major Competitions:
Droetis
Charbiss
Petrixic
Top

Sassy Cassie wrote: ↑
Tue Jan 16, 2018 11:45 am
Develop cells that can contract and expand,
thus allowing the organism to move in an eel-like fashion to increase its speed when in danger or chasing prey.

Wouldn't it be more logical to start developing fins, considering our rather limiting armour?
If I'm making a comment with this type of text I'm talking as a moderator.

Please support this. One of our votes could go towards something like a gut or tail, but we need proper immunity.