@Alpha
A Recyclosome is more of a hybrid of a Lysosome and an Endoplasmic Reticulum. What it does is breaks down food and other things and "Recycles" them into more useful things

I no longer visit this site regularly, how should I go about keeping track of when this game updates?

I mean whats with all the anger and aggression just because I am not around much anymore? :/
youtubeuserSara3346

Develop a thicker cell mebrane that can pick up protiens from other oranism, this should help mask us from basic immune system and let us parasitism them, those other pothogens are jut our competitors! lets go full parasite!
youtubeuserSara3346

I mean whats with all the anger and aggression just because I am not around much anymore? :/

Its not really aggression, I'm just letting you know that I'm going to stop reminding you to vote. I'm not sure, maybe just bookmark this thread?
My Major Competitions:
Droetis
Charbiss
Petrixic
Top

So are there any team spots for me to join or no?

I mean whats with all the anger and aggression just because I am not around much anymore? :/

Its not really aggression, I'm just letting you know that I'm going to stop reminding you to vote. I'm not sure, maybe just bookmark this thread?

Yeah if ''damn'' isn't meant to indicate an angered or at leas exasperated tone I am not sure what is...
youtubeuserSara3346 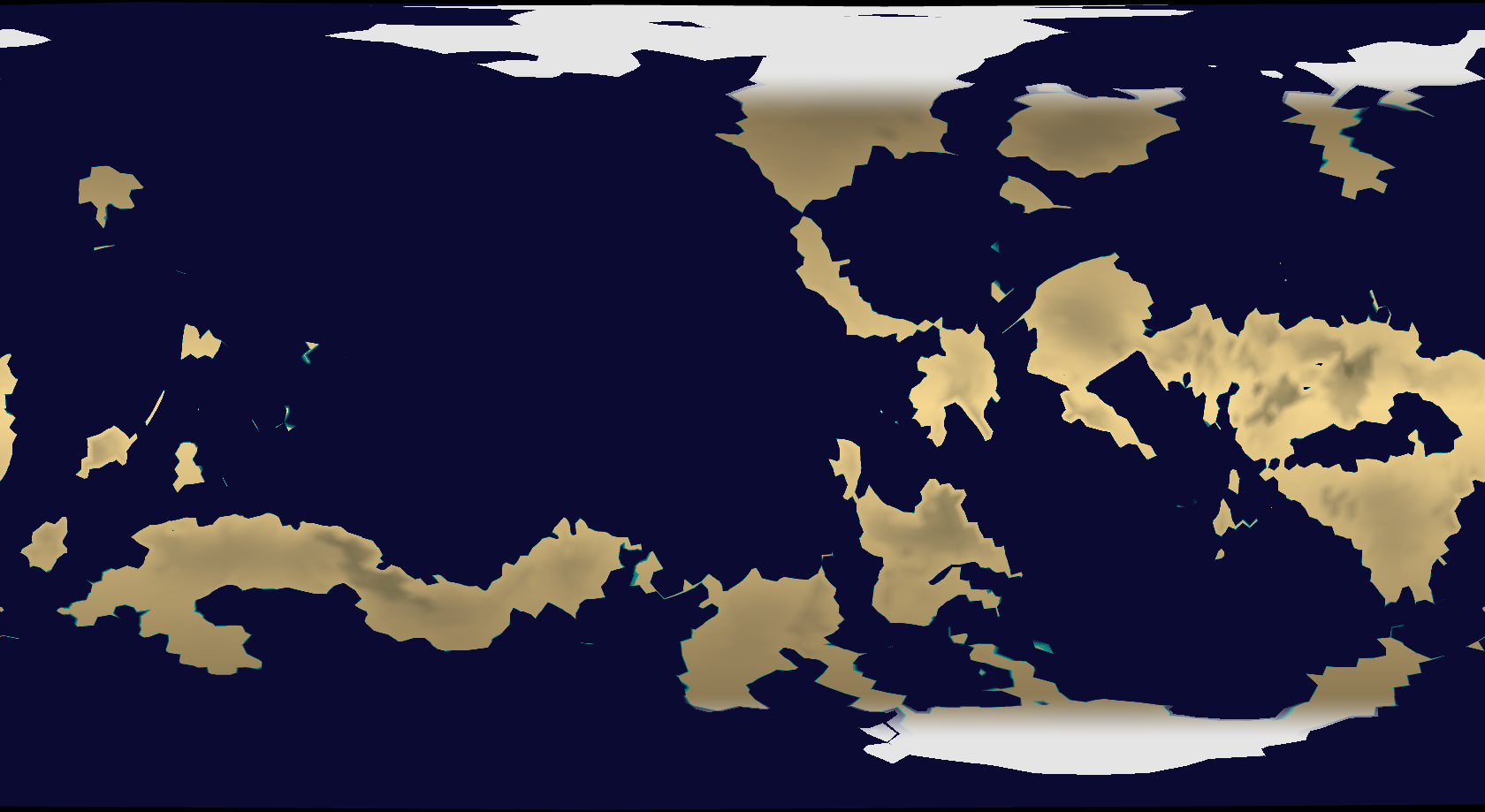 PLANET DESCRIPTION: In a solar system similar to our own, there is a small planet approximately 80% the size of Earth, known as Petrixic. Aside from this it is practically identical in terms of composition, and is located within the goldilocks zone. It has a 20 hour day/night cycle, and takes approximately 400 of its days to orbit its sun. It has one tidally locked moon which is the same proportion as Earth's moon in terms of its size relative to Petrixic. It is highly tectonically active, however the land is completely uninhabited and inhospitable, due to the very thin and weak ozone layer.
This planet has started to evolve structured multicellular organisms (mostly plant life), however the first multicellular animals have formed (although the vast majority of species are still unicellular). The amount of pathogenic bacteria and viruses has started to increase significantly, causing many species to develop primitive (and complex) immune systems and methods of defence.

PLANT LIFE: Plants have begun differentiating their cells, with root cells lacking the ability to photosynthesise however being superior in anchoring the plant to the sand/rocks as well as absorbing nutrients. Photosynthesising cells grow from a singular "stem" that connects the roots and the "leaves" (not really leaves, just continually branching photosynthetic stems) and provides a method of transferring energy and minerals. They have also started producing waterborne spores, which have rapidly spread this new group of organisms across the ocean. These primitive plants resemble red algae in terms of structure, however are generally more greenish-brown than red.

Swimming Eyes (Oculixpandus Natans)
This species has evolved a CRISPR-like method of protection against pathogenic organisms such as viruses and tiny bacteria, in which they have specific proteins that allow them to "cut" certain key DNA or RNA sequences from invading organisms and store them within a specific chromosome so they can then recognise these organisms again and destroy them by engulfing them in lysosomes. The positive apsect of this immune system is that it is hereditary, so the cell's descendants also have immunity to the same organism. However it also doesn't respond as quickly to infections as an Earth vertebrate's, as it can occasionally be overwhelmed if the invading organism reproduces extremely quickly.
An anscestral version of this species by pure accident managed to come into contact with the DNA of a recently deceased Occulus Bacteria and take in the segment of genes coding for it's Ocelloid, giving it the ability to grow one itself and in future generations. This has given this bacteria a significant advantage and it now dominates throughout the entire ocean, effectively never being preyed upon due to its superior flagella and senses.

Appearance:
Medium-sized eukaryotic cells, approximately 500 µm in diameter. Has a porous calcium-based frustule (cellular shell) that provides protection. Multiple flagella are located on its cellular membrane. They have an occeloid, a light and movement sensing organelle similar to an eye.
Notable Features: Diet:
Chemotroph: Absorbs various mineral from the surrounding water to provide energy and grow.
Habitat:
The depths to the shallows of the mineral-rich oceans of Petrixic.
Conservation Status:
LC

Common Discfeeder (Rotundimorph Comedentem)
This species has dramatically changed, now forming multicellular colonies that work together and share energy and nutrients in order to increases their chance of survival. Each cell within the colony can revert to an ancestral phagocytic stem-cell, being able to regenerate another colony (if it survives). Colonies are made up of four different types of cells, and resemble pepperoni pizzas, with the crust being a ring of air contained within a thick layer of specialised ring cells. Each ring cell has an outward-facing flagella that works in tandem with other ring cells in order to coordinate movement. Feeder cells are the cheese of the pizza, and perform phagocytosis upon other cellular organisms that they touch (mostly free-floating algae due to its lack of ability to escape) and gather energy and nutrients for the organism. Occeloid cells are located in patches (similar to pepperoni) and allow the organism to locate other algae for it to feed on. Finally, a form of immune cell similar to the ancestral species this organism evolved from patrols the "skin" of the organism, using slightly sticky secretions in order to adhere to the organism without being permanently stuck (similar to the mucous a slug uses to help it move).

This organism is slowly becoming more rare, as they do not have an efficient method of defending against viral attacks other than destroying the infected cells, which can often fracture the organism, causing it to split into tiny chunks of healthy cells that go on to (sometimes) form new colonies. 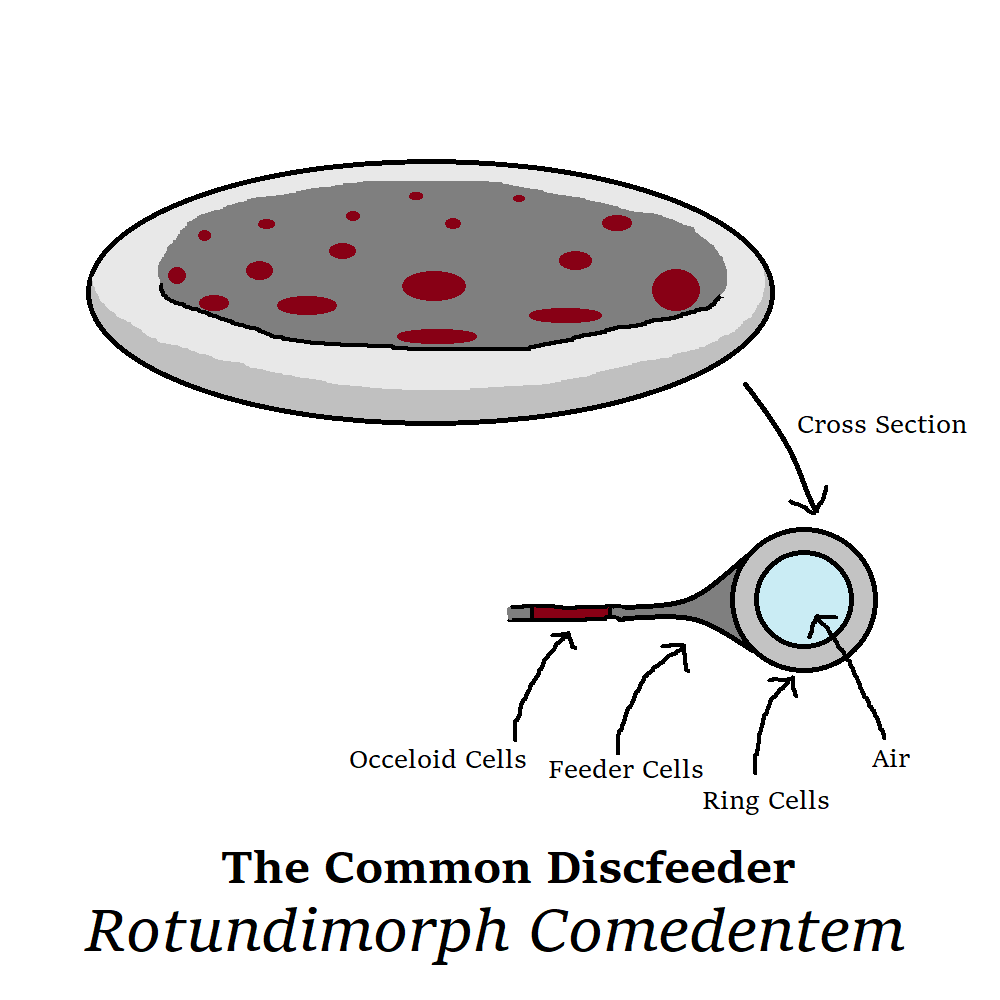 A small disc-shaped colonial organism, approximately 2 cm in diameter. They have a large ring of air within them that allows them to float. Between the ring is a thin membrane, made up of patches of phagocytic "feeder" cells and occeloid-rich patches that can sense light and movement.
Notable Features: Diet:
Herbivorous Cytophage: Specialised patches of cells engulf other organisms (mostly algae) in order to then digest them and obtain nutrients and energy
Habitat:
The shallows and surface of the mineral-rich oceans of Petrixic.
Conservation Status:
NT

Thief Bacteria (Dapibus Furem)
This organism has evolved a unique method of temporary camoflauge against other bacteria, allowing them to coexist with other species via "stealing" their proteins located on their cellular membrane, making other species view them as being a part of the same species. However, since the cell cannot regenerate these identifying proteins, they have to continually be bumping into these other species otherwise they cannot hide. Another problem is that if this cell bumps into more than one other species of cell they gain the proteins from both, causing them to be recognised as a threat/target (as they are seen as the other cell). They have also developed a new form of organelle, called a "recyclosome", which is a modified lysosome that contains ribosomes that allow for slightly faster synthesis of proteins, however this does not provide a significant benefit in the grand scheme of things.
These cells are highly susceptible to viruses, and have little to no defence against them, causing them to pretty much have a death sentence once they are infected. Occasionally recyclosomes bump into the viruses before they can kill the organism, however most of the time one manages to slip through. At the moment they can still out-reproduce the viral infections, however it is definitely taking a toll on their population. As such this species has become vulnerable.
Appearance:
Medium sized eukaryotic cells, approximately 500 µm in diameter. They are coated in hollow spines that kill other organisms that are pierced by them.
Notable Features: Diet:
Chemotroph: Absorbs various mineral from the surrounding water to provide energy and grow.
Habitat:
The rocky substrate and currents of the mineral-rich oceans of Petrixic.
Conservation Status:
VU
My Major Competitions:
Droetis
Charbiss
Petrixic
Top
Post Reply
204 posts

Users browsing this forum: No registered users and 3 guests